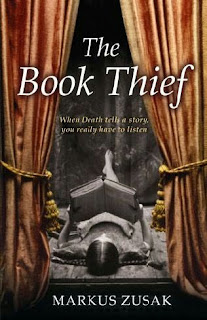 This morning at the flea (market) I was pawing through a pile of books on the asphalt and came across "The Book Thief". I read the jacket...the story of a young girl who steals books from libraries during Hitler's heyday. She distributes the books in her neighborhood to people without books. I was going to buy it until I read it is narrated by "Death". I just couldn't handle that this morning so I put the book back in the pile and went on to another stack.

A woman came along, picked up "The Book Thief".

woman: have you read this one?
me: yes, I did.
woman: wow...I've never met anyone besides me who's read this book! (woman elated) It was so...
me: strange?
woman: yes! that's it exactly! But the....
me: the death narrator?
woman: yes, the thing about the narrator being Death!
me: personally I found it a little hard to take.
woman: oh, me too.
The woman then put the book down and moved to the next stall. I don't know why I told her I'd read the book when I hadn't. But I did seem to understand it better than she did....
Posted by CJGallegos at 1:00 PM

The idea of Death narrating the story raises all sorts of questions. Whose Death is it? The protagonist's? Humanity? Doesn't Death narrate all our stories, since Death is the only one left standing at the end? I confess, I probably wouldn't read the book either, but it's interesting to think about.

I read it. Oh, just kidding.

But didn't you think it was strange?

I'd read that book in a heartbeat. I want to know how his (see how I assume it's a man) thinks, how can I trick him, delay the inevitable.