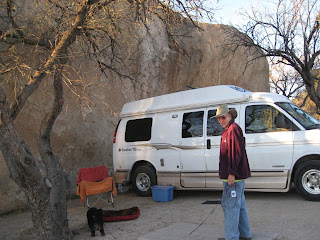 On New Years Eve we camped at the Triangle T, a ranch near Dragoon, AZ. When we got there we went to the office, a wooden building straight out of Bonanza. We stood in a small room that looked a lot like a parlor out of 1890, finally we rang the little silver bell near the doorway of a second room. When we heard voices we peeked into the office-like space.
A young man staggered out of yet another room wrapped only in a blanket. He slumped on the desk chair, his hair hanging over his face, "What do you want?" he asked us. He was joined by a woman in a pink satin skin tight dress with bright blond hair, lots of askewed make-up and multiple tattoos.
"We're checking in," we said.
"Just pick a spot," he mumbled.
"When do we pay?"
"Pay later," he said, clearly at the end of his patience.
So we picked a spot by a boulder and were asleep before 9:30. The next morning we drove to the office to settle up. The place was closed. No one around.
We would have left some money but we had no idea how much to leave, so we skipped, starting 2009 with a small crime under our belts.
Posted by CJGallegos at 6:32 PM

Oh my goodness...on the lamb again in arizona???hahahhaha If you would have stayed put with us you wouldn't have another crime under you belts!!! We ate leftover spaghetti and sat by the fire..we stayed awake til 10pm...the adventures you two have...

Janet, I wish we were all sitting around the fire right now!!! (with the dogs running free!

it was fun wasn't it...love seeing the animals able to go whenever, wherever not a care in the world...

Wow! I feel like I've been in a coma or something. This is the first time I've checked your blog since the previous post. No wonder I was jonesing! (PS got the crone word verification again! Kind of metaphysical, huh?)