Under cover in the house of a commie 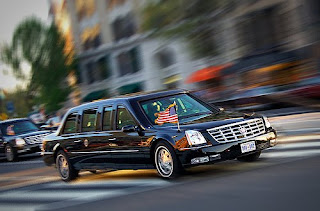 In 1962 I saw President Kennedy's motorcade from the front porch of my house in City Terrace, (an LA neighborhood.) The house was on a hill and I had a clear view as the string of limos approached the I-10 freeway.
We rented the house from a communist named Barbara, we were all hippies, led wild anti-establishment lives and it was considered just too bourgeois to be thrilled by such a thing.
So, I watched but kept my excitement under wraps, like a real secret agent.
Posted by CJGallegos at 8:02 AM

I cried through most of yesterday's ceremonies and woke up this morning feeling like I have a hangover, except with no remorse. GOBAMA!